Hundreds gathered in St. Peter’s Square in Manchester on Friday to express solidarity and outrage at the treatment of ‘Child Q’, a 15-year of Black girl subjected to a strip-search by Metropolitan police officers at her school without the presence of an appropriate adult or parental consent. Organised by a coalition of local groups – including the Northern Police Monitoring Project (NPMP), Kids of Colour, No More Exclusions, Sisters Uncut, Kill the Bill MCR, and MCR Copwatch – the demonstration renewed calls for the removal of police from schools and the realisation of abolition in our lifetimes. 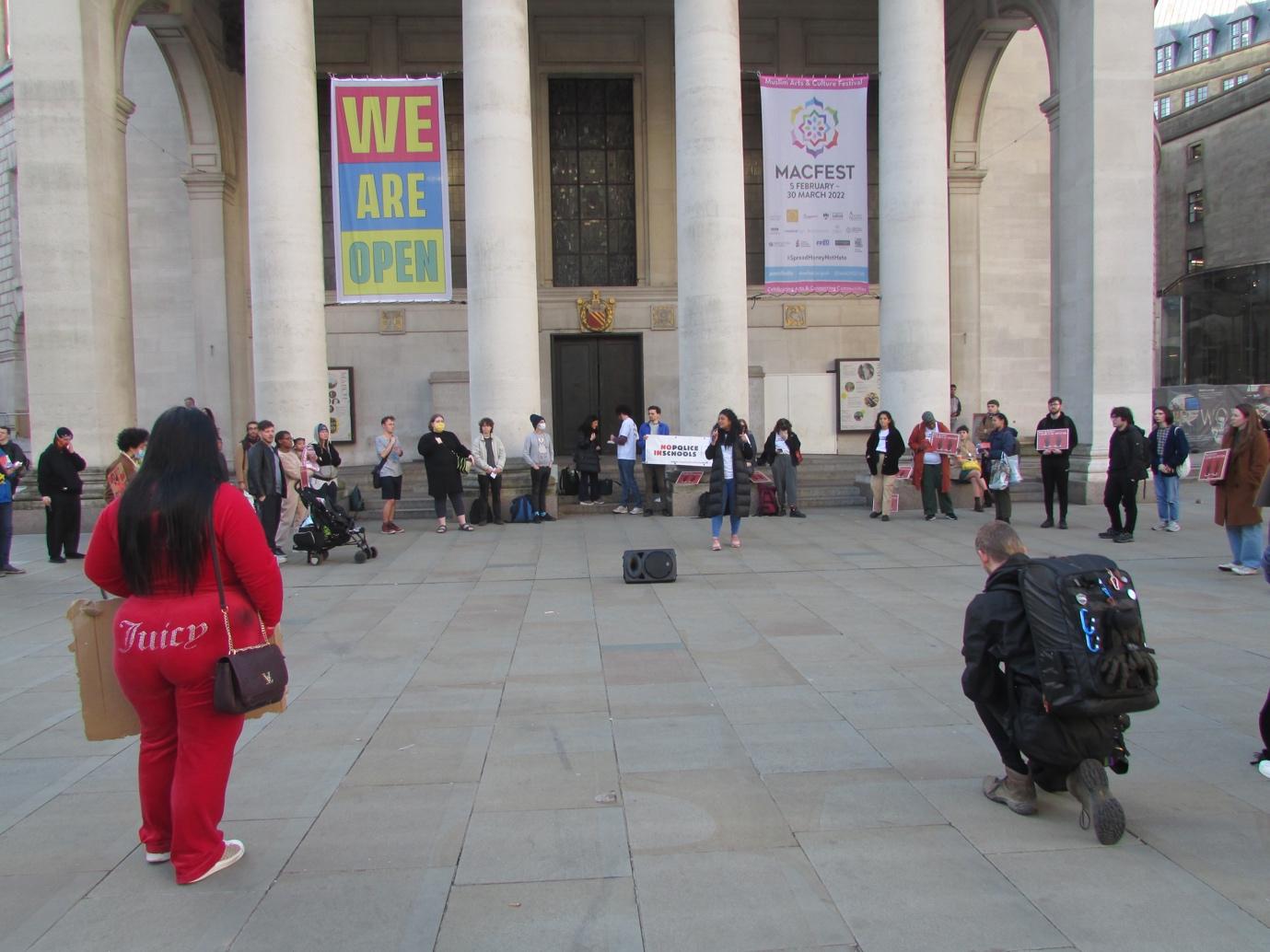 In Manchester these demands are far from new. Following a series of complaints raised by young people in 2019, NPMP and Kids of Colour submitted a Freedom of Information request that revealed that Greater Manchester Police (GMP) planned to put twenty additional police in schools for the 2020/21 academic year. As the nation went into lockdown following the outbreak of Covid-19, grassroots organisers held forums, crafted an open letter to Mayor Andy Burnham, and launched an online survey to consult young people, parents, teachers, and wider communities about their views on the decision. The results of the survey provided the foundation for a subsequent report, Decriminalise the Classroom: A Community Response to Police in Greater Manchester’s Schools (2020), which, as NPMP member Siobhan O’Neill explained, revealed widespread opposition to police in schools and concerns that their presence exacerbates existing inequalities, foster a culture of low expectations and create a climate of hostility that leads to the criminalisation of young people, particularly working-class and racially minoritised students. Instead, respondents overwhelmingly called for funding to be spent on non-punitive alternatives such as youth workers, counsellors, and more teachers. 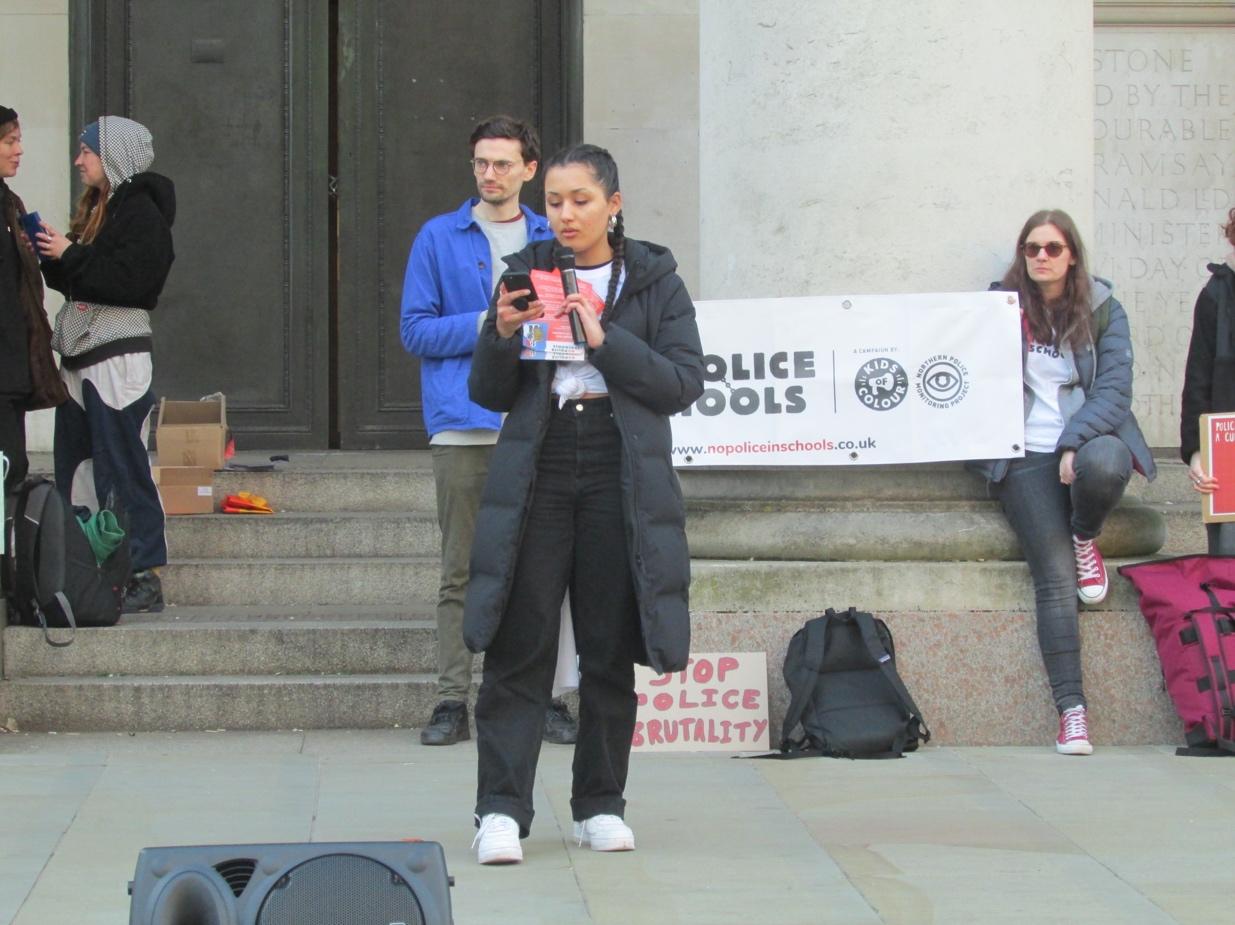 During Friday’s demonstration, these concerns were echoed once again by parents, campaigners, and young people outraged by the account of sexuall abuse and trauma experienced by Child Q. Among the speakers was Lisa Eigbadon: ‘I felt compelled to speak today because No Police in Schools is a movement and campaign I’m very passionate about because I went to a school with a school based police officer,’ Eigbadon explained. ‘When I heard about Child Q I felt sick in my stomach, and I put myself in her position and her shoes because I’ve been subject to police confrontation […] in school’. 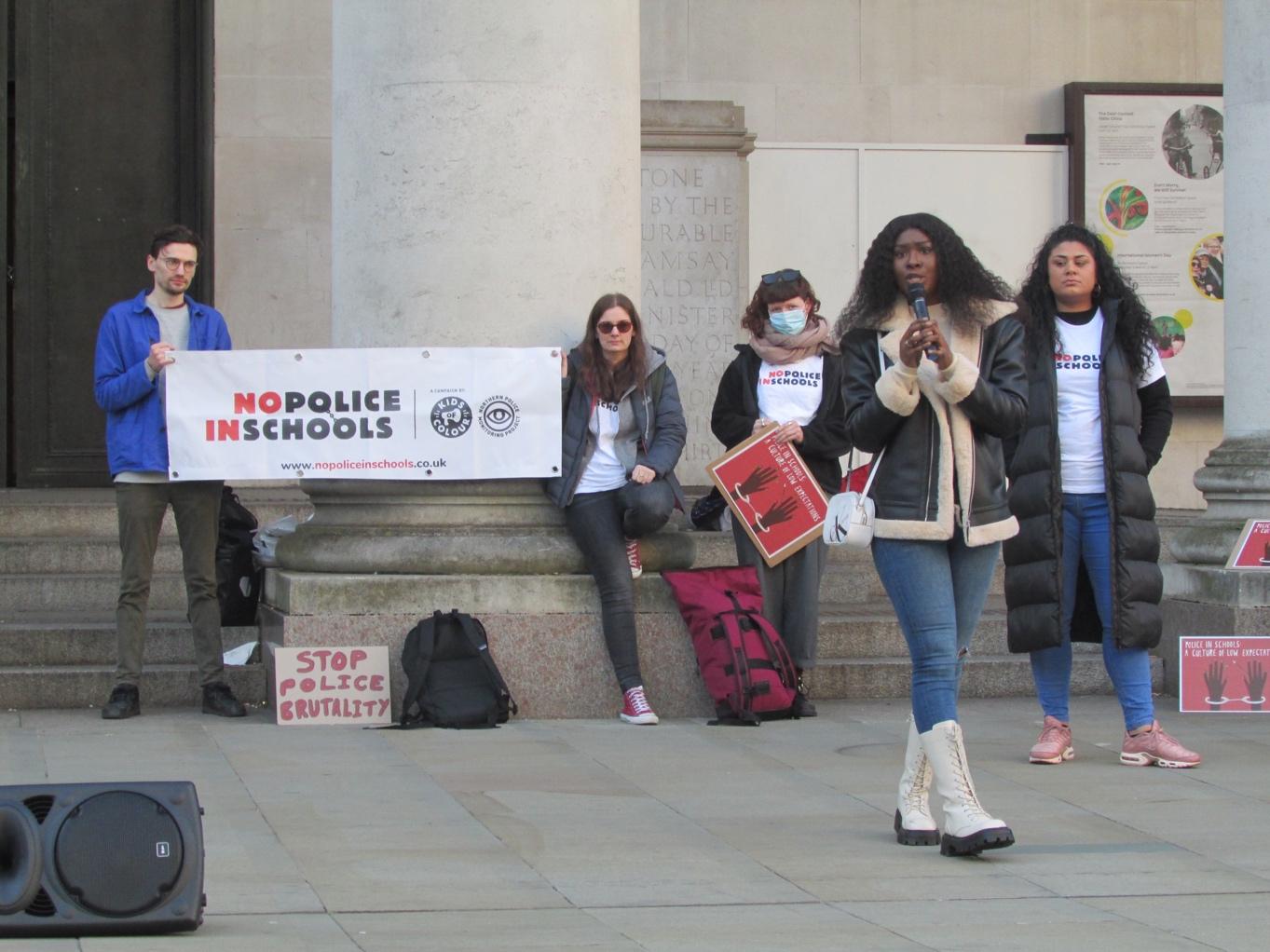 Angela Henry of the Manchester branch of No More Exclusions and Eline Davies of Kill the Bill Manchester connected Child Q’s experience to wider systemic patterns of racialised surveillance, discrimination and violence in schools. As Angela Henry explained, ‘Child Q is not the first Black young person that finds themselves being dealt with disproportionately, aggressively, illegally and traumatically at the hand of police who are supposed to serve and protect, and she won’t be the last under current policing structures.’ All of the speakers insisted that ‘police have no place in schools’ and joined Henry in calling for non-punitive transformative justice interventions of the type outlined in the recent No More Exclusions report, ‘“What about the Other 29?”: Demystifying Abolition in the UK Education System’. ‘Abolition’, as NPMP member Zara Manoehoetoe explained, ‘is about putting love and care at the centre of our approach.’ 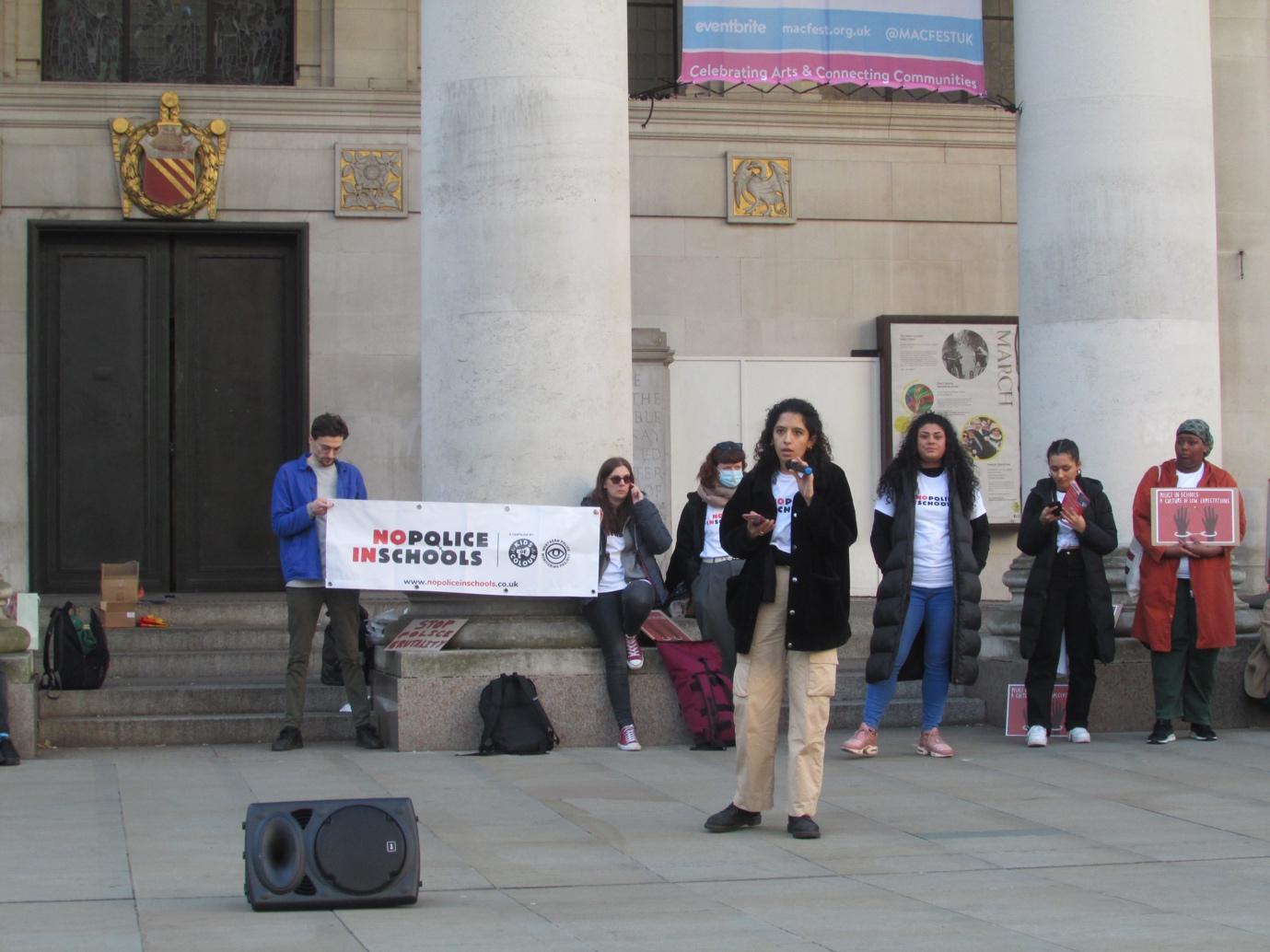 Kids of Colour founder, Roxy Legane, recounted some of the more recent developments in the local No Police in Schools campaign which through collaboration with young people, parents, and members of the National Education Union’s North West Black Members Organising Forum secured a landmark victory in July 2021 when Councillor Garry Bridges  announced that plans to introduce twenty additional officers were being scrapped. Despite these gains, Legane cautioned that police are still a presence in many local schools and that parents at a school in Trafford are currently embroiled in a battle to halt the introduction of additional officers. As Legane explained, such developments contradict the stated policy of the Greater Manchester Combined Authority that if a school does not want an officer, they will not be forced to have one, a reality that necessitates concerned parents, young people, and community members continue to push back. Pushing back, Manoehoetoe asserted, means identifying those schools that have, or are seeking to introduce, a police presence and contacting the board of governors and local councillors to express your discontent. Whether they are operating as ‘schools-based police officers’, ‘school resource officers’, ‘school liaison officers’ or by another name, if you are a teacher you should organise with your local union to pass motions opposing police in schools. And, you should join the more than 25,000 people that have already signed the No police in UK schools petition.

Abolition in our lifetimes.